If your company has a special part that needs cleaning, and you can send it to us, we will be happy to offer you a FREE trial cleaning. Just this week I mentioned this to a potential client and they happily sent me this steamer oven full of calcium deposits to trial.

The company who owns this steamer (and many others like this) is paying to replace them 2 or 3 times a year at a cost of several thousands of dollars.

By running the trial at our facility, we were able to determine the proper cleaning chemical, temperature, process, power, frequency and machine size needed for the job. The result was amazing! 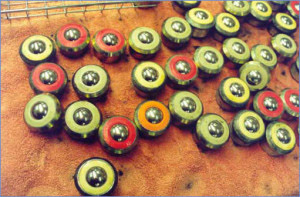 One of the things I love about my work is that I am constantly learning new things. On a regular basis, I am sent parts of all types from all over the world to either test clean or come up with a protocol for how they should be cleaned. Who knew that so many bars, valves, molds, nozzles, and other intricate objects were involved with creating so many others items? (OK…maybe you did, but this was not something I was exposed to until later in life).

So, I’ve come to learn a tremendous amount about parts in my past 15 years at Morantz, but it’s still surprising how primitive the attempt at maintenance is for many of these items. For example…

Several years ago, we were contacted by Federal Express. They wanted to know if we cleaned ball bearings. Specifically, they had ball bearings on their conveyor belts that were seizing up because of dirt, and sometimes de-icing chemical, that was getting into the crevices and preventing the balls from spinning.  To rebuild the bearings, the cost was $30/each.

We did a trial cleaning and you could literally see the dirt streaming out of the small groove. When we gave Fed Ex a quote of $1.45 per bearing for cleaning, they were thrilled! The next thing we knew, we had 10,000 bearings at our facility to be cleaned (sent via Fed Ex, of course). Fortunately, our machines could easily accomodate 100 bearings at a time.

It only took about 10 minutes per load in our machines and we were able to complete the job in a day and a half. Again, Fed Ex was thrilled! In fact, when we returned the bearings to their distribution center, we were immediately given another 10,000 bearings! And this one facility had over 300,000 bearings that were contstantly being rotated in and out, and given to us for maintenance. Saying this was a great job is an understatement.

This was the beginning of a National contract that was ongoing throughout the country and utilized many of our clients. Everybody was a winner in this scenario.