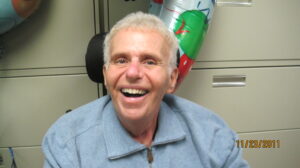 If you’re a golfer, you know how important it is to keep your clubs clean since dirt, grass, and other debris that accumulates on a clubhead can dramatically affect how it interacts with a golf ball at the moment of impact. And you also know what a pain it is to have to scrub golf clubs by hand with a toothbrush. That’s why you should be thankful for the ingenuity of Stan Morantz.

Back in 1991, Morantz patented a process for cleaning golf clubs with a machine that uses ultrasound — that is, sound at a frequency higher than the human ear can perceive. Morantz’s device made it possible to clean a club simply by inserting the grip and the head into tanks filled with cleaning fluid and connected to an acoustic wave generator.

While Morantz’s machine wasn’t the very first ultrasound golf club cleaner, it improved on an earlier design by filling the tanks and cleaning the clubs automatically. That made it possible for golf clubhouses to install token-operated self-serve machines that golfers could use at their convenience. Morantz, who died on Nov. 10 at age 69 in the Philadelphia area, actually got into golf-club cleaning as a sideline. He grew up working in his father’s drapery business in Philadelphia, and with his father invented a machine, the Morantz pleater gauge, that revolutionized the process of pleating draperies.

Morantz went on to patent 52 other devices for the drapery trade, many of which are still used by companies around the world. But when Morantz noticed that sales of draperies were declining, he got the idea of expanding into selling window blinds. And when his customers came back to him for advice on how to clean their new acquisitions, Morantz created the Baby Blind cleaning machine, the first device to use ultrasound and water to remove dirt and other contaminants.

From there, Morantz branched out. Today, the family business, Morantz Ultrasonics, sells machines that clean wheelchairs, computers, and auto parts, in addition to blinds and golf clubs.