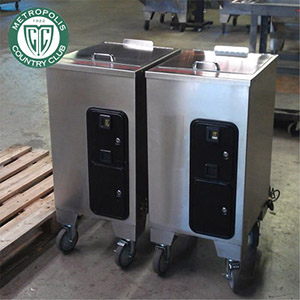 We are proud to have provided the Metropolis Country Club of White Plains, New York with a pair of our Golf Club Cleaning Machines. We are even more proud of the letter they sent telling us how happy their members are with the results.

Please read their letter, below.

We recently spent a great couple days of Contents Training with the Petruccis at their new Contents Cleaning facility. A fun time for one and all! Check out the pictures below.

Morantz Certified Trainers are available to visit your site and train your entire staff.  Training can also include an open house for adjusters and other business owners who will be interested to learn more about your new cleaning capabilities.

For more information about the z-97 or for training, please call us at 215.969.0266, or submit the form to the right. We look forward to hearing from you.

Microwave ovens are modern conveniences we take for granted, but unfortunately, as one homeowner from Western New York recently found out, they can be very dangerous.

Rainbow International of Monroe County was called in after a woman’s home was badly burned when her microwave burst into flames and set fire to her kitchen. Smoke and soot had blanketed the interior of the 4,000 square-foot home along with thousands of figurines and dolls that the homeowner had collected.

According to franchise owner Bob Cobb, the homeowner had been collecting these dolls for many years and the fire damage caused her much distress.

The entire first floor of the home was gutted and the second floor had ceilings that had to come down. The rest of the home was cleaned and painted, and the dolls and figurines were meticulously cleaned primarily using a process called ultrasonics.

95% of figurines were able to be salvaged.

With ultrasonics, an ultrasonic washer is used as a cleaning device. The washer uses high-frequency sound waves to agitate in a liquid. Cavitation bubbles induced by the agitation act on contaminants adhering to substrates like metals, glass and, in this case, ceramics. The equipment effectively penetrates holes, cracks and recesses for the ultimate clean and causes no damage.

“Normally contents to be cleaned are packed out to a cleaning facility, but our four-man crew cleaned for four weeks inside the home,” added Cobb. “A no pack-out strategy was used in this situation because it reduced packing material costs and, more importantly, lessened the chance of damage to the figurines and dolls.”

With an ultrasonic cleaner, five to 20 items can be cleaned in three to four minutes, versus cleaning by hand, which can take three to five minutes per item. Ultrasonic cleaners are used to clean many different types of objects including jewelry, optical lenses, watches, dental instruments and electronic equipment.

“The heat from the fire had unfortunately cracked some of the figurines, but we were able to save 95% of them,” said Cobb. “The homeowner was very pleased with the results and with the successful cleaning and deodorization of her home.”

Check out this video from our recent trip to Italy.
How to clean chairs with the Morantz SM200XL Ultrasonic Machine (in Italian)
L’unico modo per pulire ed igienizzare qualcosa, come le sedie di un ristorante, è il lavaggio a ultrasuoni.
“The only one method for cleaning perfectly the chairs is with an Ultrasonic Machine.” 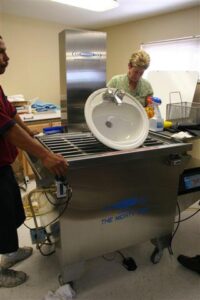 On Site training with the Morantz M-115 “Mighty One” Ultrasonic Machine.  Yes, it does clean everything, including the kitchen sink (literally!). 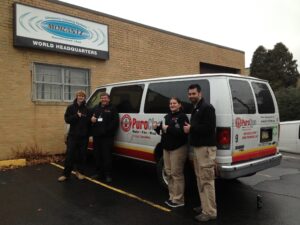 Congratulations to Puroclean of Phoenixville on their new Morantz Z-97 Ultrasonic Cleaning System!  Great day of training at our HQ in Philadelphia. 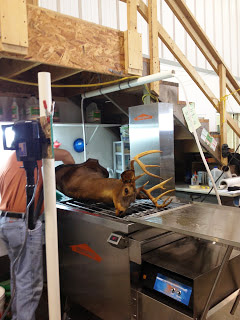 I am fortunate to work with many companies throughout the restoration, medical and cleaning industries. Each company has its own unique cleaning challenges. Some, however, are downright strange…but true. From time to time I like to post these items that make you go, “Really?”

I was recently training a restoration group in Wisconsin and the first item they brought out for test cleaning was a stuffed and mounted deer head. They asked “Can we clean it with Ultrasonics?”  “Of course”, I replied and here’s a photo of it on the M-115 “Mighty One.”

The soot that was removed was considerable; you could really see a difference in both the body and the antlers. After it was cleaned, it was then dried with a Heated Blow Dry Gun and returned to a happy owner.

The other day, I was on the phone with one of our clients in Italy. He told me he just renamed the Baby Blind Cleaning Machine that he recently purchased from us. Now he calls it “Money” because it has not stopped making him money. Here are the reasons why:

So if you have not already checked out Ultrasonic Blind Cleaning as a niche market service; one that is both easy and profitable, give us a call. We’ll be happy to show you how you can make money cleaning blinds.